Todd Almond, cast, 'Girl From The North Country', Matthew Murphy via Deadline
Playbill magazine describes it as a "jukebox musical." That very concept suggests the type of Broadway show that is well liked and potentially quite profitable; shows like Mama Mia (Abba), Movin' Out (Billy Joel) or Beautiful (Carole King). Girl From The North Country, according to Playbill, had its world premiere at the Old Vic in London followed by a run in the West End before coming to America, where it played at the Public Theater.
Girl From The North Country made its Broadway premiere on March 5, 2020, opening just in time for Broadway's Covid shutdown. The show is scheduled to resume on October 13, 2021 at the Belasco Theater in NYC. Right on time comes the newly released original cast recording.
Although I have not had the pleasure of seeing it, I think that it would be safe to say that the Bob Dylan songs are meant to advance and enhance the narrative of the play, which is set in a rundown Duluth, Minnesota guesthouse in 1941. Director and playwright Conor McPherson's choice of time and place is no coincidence as it serves also to tribute Dylan (born in Minnesota, 1941). 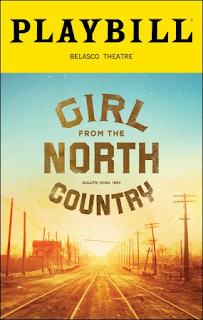 This cast album offers Dylan's music as it is used in the show. The first thing you need to know is that this is not a sound alike project. There are a number of excellent vocalists and the music avoids obvious cliches, keeping to the spirit of the originals even when sounding entirely different.
There are some songs that are instrumentals and sometimes songs are medleyed together. When this occurs, the tempos and arrangements are so well matched that the transitions are seamless. Take, for example, what may be the centerpiece of the album: "Hurricane" (Desire) contains a couple of verses of "All Along the Watchtower" (John Wesley Harding) and how that fits into "Hurricane" is mighty impressive. Then the whole song morphs into "Idiot Wind" (Blood on the Tracks) and you are left with the feeling that all those rave reviews that the show has received may be warranted. I should also note that the simple arrangement featuring acoustic guitar and violin comes close to the Dylan original.
The show even pleased perhaps the toughest critic in the room, Dylan himself. 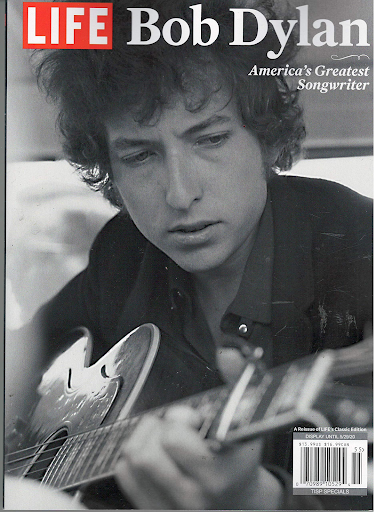 "Sure I've seen it and it affected me. I saw it as an anonymous spectator, not as anyone who had anything to do with it. I just let it happen. The play had me crying at the end. I can’t even say why. When the curtain came down, I was stunned. I really was. Too bad Broadway shut down because I wanted to see it again."      Bob Dylan interview - NYT 6/12/2020
The music of  Girl From The North Country cuts a nice swath through Dylan's catalogue, hitting some very familiar compositions and some less so. These songs were all nicely arranged for the show by Simon Hale. The choice of material seems to be governed by the play and not vice versa. The musicians and cast of this show try to honor the music without succumbing to Broadway musical stereotypes.
[Full Disclosure: I've been listening to Dylan since his start in the early 1960s. I am not a Dylanologist, but I have had my favorites over the course of his epic Nobel Prize winning career. I lean toward the period of Blonde on Blonde through Desire, but the rest has its moments, too. Also, completists may wish to know that this article pertains to the newly released Broadway cast album and that there is also a London original cast album.]

1. Sign On The Window
2. Went To See The Gypsy
3. Tight Connection To My Heart (Has Anybody Seen My Love)
4. Slow Train/License To Kill
5. Ballad Of A Thin Man (Instrumental)
6. I Want You
7. Blind Willie McTell (Instrumental)
8. Like A Rolling Stone/Make You Feel My Love
9. Like A Rolling Stone (Reprise)/I Want You (Reprise)
10. What Can I Do For You?
11. You Ain't Goin' Nowhere/Jokerman
12. Sweetheart Like You/True Love Tends To Forget
13. Lay Down Your Weary Tune (Instrumental)
14. Girl from the North Country
15. Ballad of A Thin Man (Radio)
16. Hurricane/All Along The Watchtower/Idiot Wind
17. Tonight I'll Be Staying Here With You (Instrumental)
18. Duquesne Whistle/Señor (Tales Of Yankee Power)/Is Your Love In Vain?/License To Kill
19. Lay, Lady, Lay (Instrumental)/Jokerman (Reprise)
20. Clair De Lune (Instrumental)
21. Forever Young
22. Pressing On