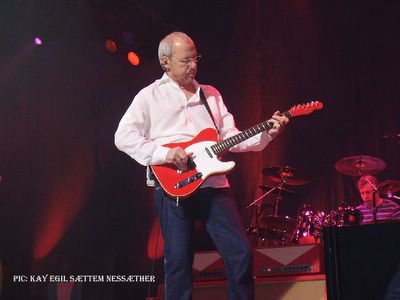 Mark Knopfer has his reasons for retiring the Dire Straits tag, and his solo albums have studiously avoided the sort of guitar pyrotechnics that built a huge worldwide following for this amazingly talented player. However in concert, even now, fourteen years on since the last proper Dire Straits album, the distinction is irrelevant. Knopfler live is Dire Straits, regardless of who's manning the bass, drums, and keyboards. The solo material which on record often cries out for more guitar, gets fleshed out in concert with all the guitar that's lacking in the studio versions. The Dire Straits classics are well represented in the set too and Knopfler still kills on every one.

The concert production on this tour is a good as it gets; superb lighting with numerous color schemes to delight the eyes. More importantly, the concert sound was the best I've ever heard; loud and powerful when it needed to be with nice deep bass, with a perfect mix that allowed every instrument to be heard clearly, which was especially impressive during the songs that mixed acoustic backing with Knopler's electric lead. At one point I noticed Guy Fletcher stage rear, lightly tapping a tambourine which could amazingly be clearly heard in the sound mix.

Knopfler is becoming the elder statesman of the electric guitar, with his graying hair and glasses his look reminded me of Eric Clapton one minute, and Chet Atkins the next. Appearing relaxed in jeans and black t-shirt, he makes playing the guitar look deceptively easy, the amazing leads seeming to pour effortlessly from his guitar. 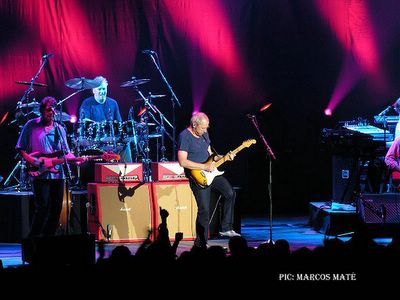 The Mann has a strict no-camera, search-on-entry policy, but these fan shots from the website are from the current tour and look exactly like the show here. It occurred to me during "Sultans of Swing" that we've been listening to this song for twenty-seven years now and it has never sounded better; Knopfler added a nice rockabilly style solo for a good couple of minutes to finish the song. Opening the show was Irish singer-songwriter Bap Kennedy who delivered a suprisingly enjoyable set, accompanied by an excellent electric guitarist, resulting in a sound that reminded of a sort of Irish Chris Isaak. 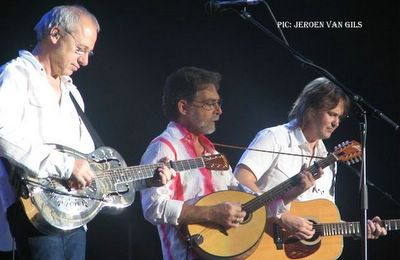 Charlie Ricci said…
I love "Telegraph Road." It may be my favorite Dire Straits track.

I'm glad the concert was great, especially at the high prices. I tend to think the "singer-songwriter" Knopfler of his last 3 albums beginning with Sailing To Philadelphia is less interesting than Dire Straits because there is a lot less of my all-time favorite guitar player showing off his stuff. Yet he is still head and shoulders above most other rock artists in my book. His music, both the new and the old, are not dated in the least.
6/27/2005