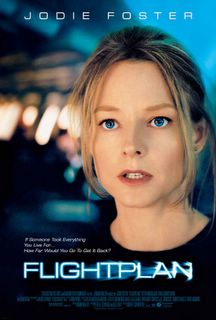 a taut thriller directed by Robert Schwentke, Jodie Foster plays Kyle Pratt, a mom who has just lost her husband and together with her six year old daughter Julia, is flying the body from Berlin back to New York aboard a jumbo jet. Mom and daughter stretch out for a snooze just after takeoff and when Kyle wakes up several hours later, Julia is missing. After a search of the plane, she is told that there is no record of her daughter ever being on the flight, offering the dual scenarios that either a kidnapping has taken place or that Kyle is just a delusional mom, overcome with grief due to the death of her husband.

Conveniently, Kyle is a jet propulsion engineer, familiar with every hatch, nook, and cranny of this airliner. Evidence such as the child's blanket, stuffed toy, and her heart tracing in the fog of the jet's window suggest that the delusional mom theory has been engineered by the clever kidnappers, and you don't have to be Roger Ebert to figure out early on that air marshal Rich, played with oily effectiveness by Peter Sarsgaard is somehow involved.

It's no giveaway of the ending to say that the woman (and child) in peril sequence that the plot degenerates to, is one that we've seen over and over and over again in the movies. The reason that this is disappointing is that otherwise the movie is really well done. The direction, the cinematography, the casting, and the acting is all first rate, especially the portrayal by Jodie Foster of the frantic yet resourceful mom.

Greta Scacchi appears as a therapist who tries to help in mid-flight; Scacchi's British accent is instantly identifiable, even if they have her looking more like the shrink from The Sopranos. That an actress of Scacchi's accomplishment winds up playing a bit part in an action thriller like this is kind of disheartening, but she does add a little class to anything that she's in.

The tension never lets up as the movie unspools which allows me to give this a conditional recommendation: if you're someone who has the capacity to suspend disbelief and enjoy a well made action thriller, you could do a lot worse than spending ninety-eight minutes with Flightplan. Anyone else will find this plot to be preposterous from beginning to end and should likely take another flight.