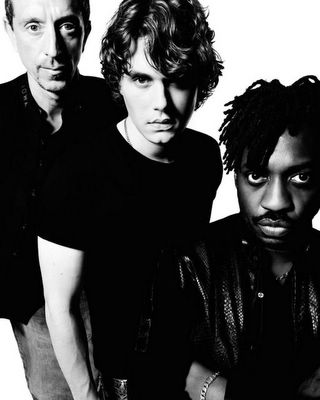 John Mayer's extraordinary success in his relatively short career has afforded him the freedom to let loose his inner musical child, which it turns out is a prodigy of the electric guitar.
First, a quick review: Mayer's first major label release, Room For Squares

came out in 2001 and is now certified quadruple platinum. His second album Heavier Things

is certified double platinum, but it's only been on the market since 2003. Even the live album Any Given Thursday

(2003) is certified platinum in both cd and dvd formats.

Anyone who was lucky enough to hear the promotional bonus disc containing live versions of "Lenny" and "The Wind Cries Mary" that Sony gave away with Room For Squares when it first came out, knows two things: that Mayer has an amazing gift with the electric guitar that allows him to channel Stevie Ray Vaughan channelling Jimi Hendrix; and that this talent has been drastically underutilized up until now. Meanwhile, Mayer's other gifts for songwriting, singing, and playing, have combined with excellent soft rock production to build an enormous and intensely passionate fan base which started at the college and high school level and expanded from there.

Mayer has now done what most musicians only dream about. He's surrounded himself with the cream of session musicians, Steve Jordan on drums and Pino Palladino on bass, to play what he wants, which is strictly electric guitar music that centers on blues and jazz. The trio format allows Mayer's guitar to define every song, and he's totally got the goods. In addition to the aforementioned Stevie Ray and Hendrix influences, there were moments that brought to mind B.B. King, Ray Charles, and even the slow electric blues of Led Zeppelin's first album.

The joy Mayer derives from playing this music is infectious; the glow in the room wasn't just from the many cell phones and digital cameras being held aloft. Mayer brought out guest trumpet player Roy Hargove to blow some nice jazz and blues horn on several tunes, sounding especially great on "Ain't Gonna Give Up on Love," a long slow blues burner, when Mayer after a luxurious and beautiful solo, called Hargrove back onstage to do likewise. 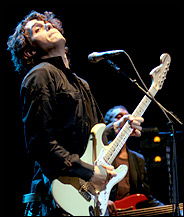 Mayer's performance was so great and the choice of material was so gutsy (all electric guitar music, heavy on blues, jazz and rock, light on his big hits), that even though some of the audience likely received their first ever exposure to blues and jazz tonight, the crowd savored every minute of the nearly two hour set. There was rapt attention during the songs, with appropriate applause after the solos, and in between songs the place went nuts. By the end of the set the crowd was cheering like Beatle fans in 1964. The encore performance of "Daughters" was a total knockout in its new electric, bluesy, slowed down re-arrangement that nonetheless had the entire crowd (at least all the girls) singing along every word.

I haven't heard a set of electric guitar music this well played since, oh, last July when Buddy Guy played Penn's Landing in Philadelphia. Seeing as Mayer and Guy have spent quite a bit of time touring and playing together over the last few years, I think it's safe to assume that Mayer's new focus on electric guitar music is inspired by and affirms his affection and respect for the music of Buddy Guy, and then some. Here's tonight's set list, courtesy of a fan named Debbie (screen name docoboc) who already had it posted on the My Stupid Mouth discussion board by the time I got home from the show.

Jocelyn (Jocelyn2003) on the same message board summed up tonight's show with "suffice it to say that this was the best John Mayer concert I've ever seen, and it was my 28th." I'd have to totally agree even though this was only my 2nd. There is currently a two track single by the Trio, "Who Did You Think I Was" b/w "Come When I Call" available now on iTunes, but watch for the release of John Mayer Trio Live