In 1994 Traffic reunited for a new album and concert tour, and The Last Great Traffic Jam

documents that tour. The setlist for this dvd concentrates on the classic Traffic songs, with just one tune from that year's new album, Far From Home.

All the performances captured here sound truly great and are a priceless addition to the Traffic catalogue.

This reunion included only Steve Winwood (lead vocals, guitar, piano, and Hammond B-3) and Jim Capaldi (drums and vocals), being that Chris Wood, the third primary member of Traffic, passed away in 1983; Capaldi has since left us this past January. Playing the sax, flute, and some superb Hammmond B-3 on this tour was Georgia native Randall Bramblett, an accomplished singer songwriter in his own right who has also played with Greg Allman, Robbie Robertson, and the band Sea Level. Rosko Gee joined Traffic in the final 1974 incarnation playing on When the Eagle Flies,

and he returned on bass in 1994 for the reunion album and tour. Walfredo Reyes, Jr. plays additional drums and percussion, and Mike McEvoy plays keyboards. 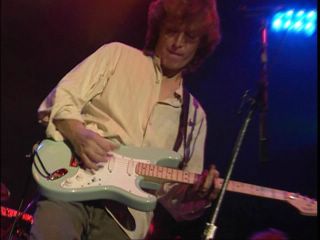 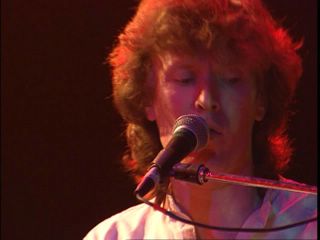 The arrangements, production, and sound on this tour were excellent, providing definitive live readings of this classic repertoire. Winwood shows his mastery of every instrument, cutting some mean guitar leads on "Medicated Goo," pounding the signature piano line from Glad in combination with Bramblett's excellent work on the Hammond B-3 organ; Winwood nicely handles the B-3 elsewhere in the set. The trademark sound of "John Barleycorn" is intact here with Winwood on acoustic guitar, McEvoy on keyboard, and Bramblett on flute with Capaldi joining Winwood on vocals. While stating that he would not try to duplicate Chris Wood's parts, Bramblett is nonetheless terrific on sax and flute. 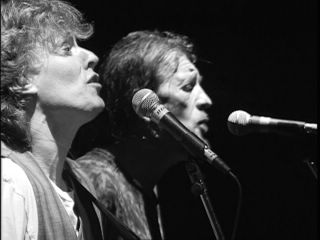 Capaldi's vocals sound a little gruff as compared to his previous work, but he's effective nonetheless taking lead on the rocker "Light Up or Leave Me Alone" during which he introduces each band member for a solo. Another special moment captured on this dvd is the performance of "Dear Mr. Fantasy" recorded at Chicago's Soldier Field when Traffic opened for the Grateful Dead, and Jerry Garcia sat in on guitar, making this disc essential for Dead fans. This date was approximately one year before Garcia's death and you can see that he's not looking all that well. 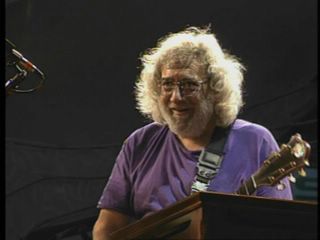 The only flaw in this dvd is the film direction by Simon Vieler. The camera zooms and dances in a lame attempt at psychedelic effect combined with backstage home movie type clips that are run during the live songs while the music continues on the sound track. The picture while the band plays seems to cut back and forth between several different performances. That by itself would only be a mild annoyance, but the larger bad idea was to cut away from the stage after every song to show backstage footage that serves only to distract from the excellent music going on in the concert sequences.

The backstage footage might have been more palatable if there had been some interviews or any sort of documentary concept, but what you get here is basically scene after scene where the camera is turned on, and the band members are expected to be spontaneously witty for the camera and the end result is tedium at best. This footage might even be interesting to watch if were presented as a separate feature on the dvd but after a few song breaks you'll just want to throw something at the screen; cinema verité this is not.

Fortunately, the quality of the music triumphs over the limitations of the video production as well as the unfortunate choice of title and cover art, making The Last Great Traffic Jam an absolute necessity for every Traffic collection. The dvd also contains a bonus audio cd with live in studio acoustic rehearsal versions of "40,000 Headmen," "John Barleycorn," and "Low Spark," also recorded in 1994.