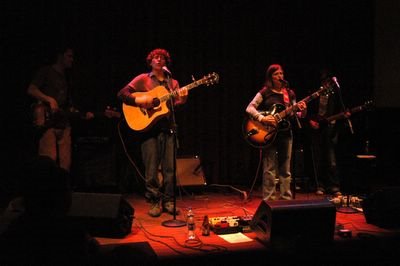 The Weepies played a very tuneful and listenable set tonight at the World Cafe Live in Philadelphia. They seemed surprised at the size of the sellout crowd in the upstairs venue and continually expressed their appreciation to the audience for coming to see them. The Weepies backstory may be equal parts happenstance and destiny but it is storybook all the way. Deb Talan and Steve Tannen were each already taken with each other's music when they met at Club Passim in Cambridge, Mass. where Steve was appearing in support of his first cd. They began writing together that very night and the rest as they say, is history. Check out the Weepies website and their MySpace page for the complete story as well as a generous number of complete tunes from all their albums which stream on the website for a free listen. 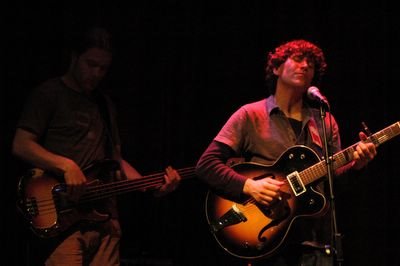 After recording a total of five solo cds between them, they joined forces as the Weepies, indpendently releasing their first cd Happiness in 2004. A recent sold out performance at New York's Living Room led to a contract with Nettwerk Records and their just released second effort and major label debut, Say I Am You.

The music is solidly acoustic melodic folk/pop with a healthy dose of electric guitar in the mix. During tonight's show, the first of a national tour, Deb and Steve played acoustic and electric guitars, switching off from time to time. For the first six shows of this tour including tonight's show, they are accompanied by a bass player whose name I didn't catch, and by Meghan Toohey on electric guitar. The tour includes three sold out nights at Club Passim, with a fourth show just added, another sold out show at the Living Room, then it wends its way out to the west coast and finally crossing the Atlantic for summer festival dates in England, Ireland, and Scotland's T in the Park Festival. 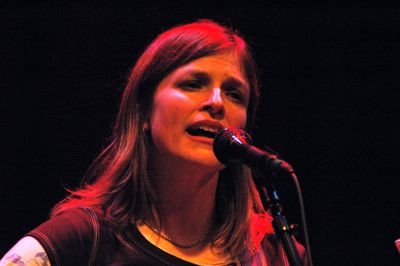 The set included ample portions of both the Weepies cds as well as a solo track or two. "Vegas Baby" and "Jolene" from the first album got a great crowd reaction as did "Take it From Me" from the new album. Dedicated do-it-yourself-ers from carrying their own equipment to collecting mailing list info on a yellow pad, Deb made a beeline to the merchandise table as soon as the set ended, where she could be found meeting the fans and selling cds and t-shirts. Deb and Steve are both incredibly down to earth, wholesome, cute, friendly, funny, and most of all talented singer-songwriters who made tonight's show a complete pleasure. Remember to click on each photo to enlarge. All photos © W.Kates, 2006.