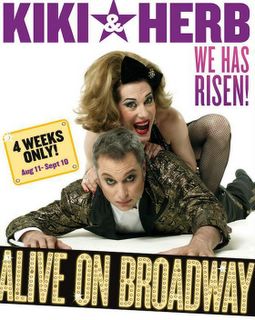 Kiki & Herb previewed their new Broadway show for four nights at Philadephia's Wilma Theater this week. Initially thinking this to be something of a self-test of my own open mindedness, Kiki & Herb's show quickly exploded the notion that one needs to be gay to enjoy drag queen musical comedy cabaret lounge act theater (not that there's anything wrong with that). Having honed their act for the better part of the past twenty years, Justin Bond totally becomes the aging diva Kiki, and Kenny Mellman is equally at home in the role of her piano man Herb, variously described in the act as a "gay Jewish retard."

Essentially, it's a parody of a lounge act where Herb plays piano and Kiki sings and drinks. The songs are interspersed with lengthy asides that are both historical (tales of their characters' history) and hysterical. As outrageous as the comedy is (the stuffed toy cow on the piano was described as having been in the manger when Jesus was born, and having eaten the afterbirth was bestowed with eternal life), the show hits some serious social and political notes as well without missing a beat. 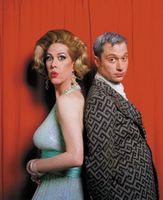 Beyond the comedy and the commentary, the real key to the show is the excellent musical presentation. Herb is a supremely talented piano player, working the entire night providing accompaniment to the stories as well as the songs. By never breaking character, Kiki gets to have it both ways with the songs, both sending up and celebrating the art of the lounge singer, the aging diva, and even the drag cabaret stereotype from which their act obviously originated. About halfway through the first song when it dawns that you are hearing a lounge version of the current Gnarls Barkley hit "Crazy" it quickly becomes apparent that this is going to be no ordinary ride.

The song selection is both eclectic and goofy and therein lies the charm. Dan Fogelberg would likely have a coronary were he to hear Kiki & Herb's wonderful version of his "Same Old Lang Syne" reimagined as a chance meeting between Kiki and her estranged daughter. Clearly, the more pretentious the song, the better it plays for comedy. One could think of many more songs that would benefit by the Kiki and Herb treatment. The showstopping version of "Total Eclipse of the Heart" left that chestnut stuck in my head long after leaving the theater. After the final curtain call, I was left with just one thought: there's no people like show people! 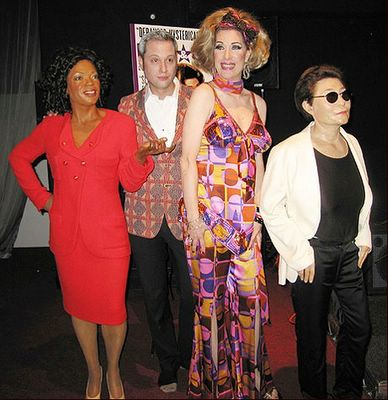 All Kiki & Herb photos courtesy of their website and Myspace page © 2006.