WXPN's 885 Greatest Artists - It's That Time of Year Again

Following up last year's 885 Greatest Albums, which itself was a sequel to 2004's 885 Greatest Songs, WXPN has launched this year's listener survey to determine the 885 Greatest Artists of all time. Dismissed as silly by some but hotly debated and agonized over by others, these surveys provide great fun during the voting and a great listen when the results get counted down on the air. Go to xpn's website to submit your top ten list which also enters you in a contest to win the complete cd catalog of each of the top three artists as voted by the listenership. Voting deadline is September 10th. Check out the xpn discussion boards which will heat up as the countdown gets closer, with real time critiques, reaction and tears as the results are revealed. Also check out xpn's staff and artist picks, and xpn's music blog. 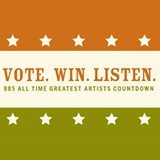 Listener JimGPhynn of Horsham got the ball rolling very nicely on the discussion board with this post, Letterman style, of the top ten reasons not to vote for the Beatles:


My first move is to compile a list of every artist who would be worthy of inclusion on a top ten all time list. I think my number one and two positions are locked in already, the rest are up for grabs. Here we go:

Here comes the hard part, picking 8 out of the following list, each one of which seems worthy on their own of an all time top ten berth. Here's the rest of the field: