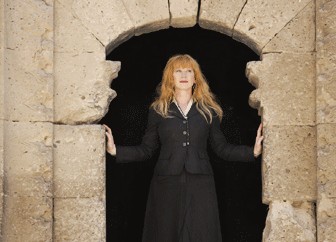 It's been a long nine years since Loreena McKennitt's last album, The Book of Secrets (1997). This fall, Loreena will release her seventh studio album, An Ancient Muse. Check out the e-card announcement.

Here are all the details from the official Quinland Road/Verve Records press release.

This autumn, Verve/Quinlan Road will release Loreena McKennitt’s label debut, An Ancient Muse. As with her earlier albums, McKennitt takes her inspiration from the Celtic peoples, fusing the melodic sensibility of Scottish and Irish balladry with musical traditions from Greece, Turkey, Spain, and even Scandinavia. The recording is McKennitt’s first new studio album since 1997’s multi-platinum The Book of Secrets.

Produced by Loreena McKennitt, An Ancient Muse continues McKennitt’s exploration of Celtic themes on a journey that sweeps across eras and musical genres, from the British Isles to ancient Greece and Byzantine- and Ottoman-era Turkey. As McKennitt herself describes it, “This record is a little like equipping yourself with a Eurail card. It’s like saying, I don’t know where I’m going to on this trip. I’m just going to get on board the train, and allow each encounter to lead to the next.”

The nine tracks on An Ancient Muse take the listener on a timeless journey: a return home in “The Gates Of Istanbul;” the wonder of nomadic wandering in “Caravanserai;” star-crossed love and the Crusades in “The English Ladye and the Knight” based on a poem by Sir Walter Scott; and loss and longing in “Penelope’s Song,” which takes as its subject Odysseus’ wife, waiting and worrying while he was off having the adventures immortalized in Homer’s The Odyssey. Despite the wide array of instrumentation (including oud, lyra, Swedish keyed fiddle and viols da gamba), all the performances derive from similar inspiration: the sense of landscape McKennitt brings to all of her work—a visual set of images, organically connecting the piece to musician and instrument.

McKennitt works from her hometown of Stratford, Ontario, Canada where she is self-managed, self-produced, and head of her own internationally successful record company, Quinlan Road. In a recording career spanning two decades, her music has won worldwide critical acclaim and gold, platinum and multi-platinum awards in fifteen countries across four continents. She has won numerous awards including the Billboard International Achievement Award and two Juno Awards.

McKennitt says of her collaboration with Verve: "In so far as this recording represents a musical journey of exploration, I am very much looking forward to working with the people at Verve in exploring the possibilities this new musical document may embody." “Loreena is a truly gifted artist, producer, and business person,” says President and CEO of the Verve Music Group Ron Goldstein. “The new album will surely please her dedicated and loyal audience, who have been anticipating this event for a long time. It is, once again, a masterpiece of originality, spirit, and great music. We are thrilled she has chosen to work with Verve.”