I ♥ Huckabees, 2004, Fox Searchlight Pictures, An Existential Detective Story, I ♥ I ♥ Huckabees 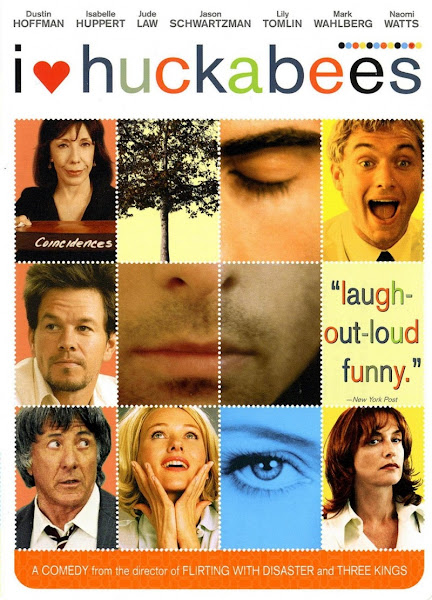 I don't know how I missed this movie when it came out in 2004. How I found my way to it now is somewhat germane. I am in a long project to digitize my music collection and last week I ran across a CD of the soundtrack to I ♥ Huckabees. I gave it a listen, it sounded good. I read a thoroughly glowing AllMusic review, it was essentially a Jon Brion album; he is a pop-meister, producer, musician, and songwriter. He has worked with Fiona Apple and Amy Mann and has a number of film soundtracks to his credit. Here is a little bit of what Stephen Thomas Erlewine wrote on AllMusic.com.

"While there are elements of the carnival-esque sound of his Magnolia score -- after all, that is his signature -- as well as his moodier charts for Punch-Drunk Love and Eternal Sunshine of the Spotless Mind, Huckabees has a mischievous, impish spirit that distinguishes itself from those three other major works. There's an offhanded virtuosity in the arrangements and eclecticism that's rather astonishing -- the music is so whimsical and light on its feet, so entertaining in its kaleidoscopic array of colors and sounds, that it takes close listening to realize how clever and subtle it all is. That alone would have made Huckabees more than worthwhile, but those five new songs are all pretty terrific too. Anybody familiar with Brion's collaborations with Mann and Apple will not be surprised by what's here, but these songs are so well-crafted -- so sturdy in their melodicism and so imaginative in their production -- that they're impossible to resist; they're appealing on the first listen and grow more emotionally resonant with each spin."

After reading that, I was in. I also learned that I ♥ Huckabees was directed by David O. Russell and since I absolutely loved his two most recent movies, Silver Linings Playbook and American Hustle, I knew I had to see I ♥ Huckabees.

Courtesy of Netflix, this afternoon I dropped the disc into my player and quickly realized that this was not like any other movie that I can think of. It's somewhat of an existential detective story that plays almost like a stream of consciousness. It's got a great cast. Jason Schwartzman plays Albert Markovski who works for Huckabees, a chain of big-box department stores. They don't name names, but I think most viewers would identify the woodlands he's saving as the Walden Woods project in Massachusetts. Dustin Hoffman and Lily Tomlin are likewise perfectly cast as the existential detectives. They never say her full name but they're are 20 million references to Shania, "Shania doesn't give a shit". And it's oh so sweet when Jason Schwartzman and Jude Law are arguing on the elevator, then the door opens and we see Shania Twain and she says "I am vegetarian, I eat tofu tuna". 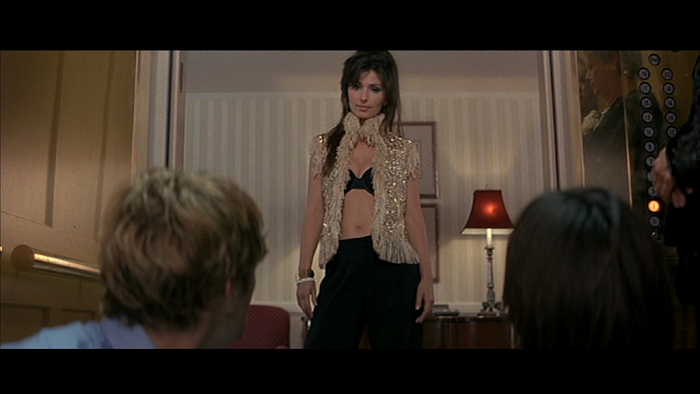 There's lots more to it of course and there is a great cast that includes Mark Wahlberg, Naomi Watts, Isabelle Huppert, Talia Shire, Richard Jenkins, Jonah Hill, and Isla Fisher. The writing and the dialogue are the main attraction here. As I watched this I couldn't imagine how the copywriters at Netflix could write the paragraph on the disc sleeve with a straight face. About three quarters of the way through the movie I had to re-read the sleeve.

"When a mystery needs to be solved, and it's not a whodunit but rather a maze involving complex emotions, it requires the expertise of intellectual -- and perhaps slightly kooky -- detectives Vivian (Lily Tomlin) and Bernard (Dustin Hoffman). Jude Law and Naomi Watts co-star in David O. Russell's quirky comedy that finds the existential husband-and-wife team helping a do-gooding client (Jason Schwartzman) who's plagued by twists of fate."

That's actually a pretty fair description of the movie, but if you haven't seen it, I don't think it really prepares you for what you are about to see. The entire time, it seemed to me that it played like modern day Firesign Theater. I can tell that I loved this movie because it kept a smile on my face almost the entire time. I can't wait to watch it again. Ironically, the music didn't play that much a part in the movie. The movie's music soundtrack was good, certainly, but nothing like the way Russell uses music in American Hustle.

"Pairing up with another of the duo's clients--firefighter, tough guy and uncompromising soul searcher Tommy--he joins forces with the Jaffes' arch nemesis, the sexy French philosopher Caterine Vauban, who valiantly battles for the contrasting point of view. Now, as Being chases Nothingness, Albert, Tommy, Brad, Dawn, Bernard, Vivian and Caterine chase one another in a wild romp through life's biggest questions to find the true answer."

Roger Ebert totally didn't get I ♥ Huckabees. He wrote,

"I went to see "I Heart Huckabees" at the Toronto Film Festival. It was on the screen, and I was in my chair, and nothing was happening between us. There was clearly a movie being shown, but what was its purpose and why were the characters so inexplicable? I found the pressure point that is said by the master Wudang Weng Shun Kuen to increase mental alertness. Then I dashed out for a cup of coffee. Then I fell into the Yoga sutra of yatha abhimata dhyanat va, literally clearing the mind by meditating on a single object until I become tranquil. I meditated on the theater exit door."

Finally, I think Manohla Dargis of the New York Times got it right when she wrote,

"The high-wire comedy 'I ♥ Huckabees' captures liberal-left despair with astonishingly good humor: it's 'Fahrenheit 9/11' for the screwball set. Chockablock with strange bedfellows — Dustin Hoffman and Lily Tomlin play a hot-and-heavy married couple, Jason Schwartzman gets his groove on with Isabelle Huppert — the film is a snort-out-loud-funny master class of controlled chaos. In this topsy-turvy world, where Yes is the new corporate No and businesses sponsor environmental causes while bulldozing over Ranger Rick, a pair of existential detectives sift through a client's trash to solve the riddle of his malaise. Like the film's director, David O. Russell, they gladly risk foolishness to plunge into the muck of human existence."

Bill Dorman said…
I am soo in !