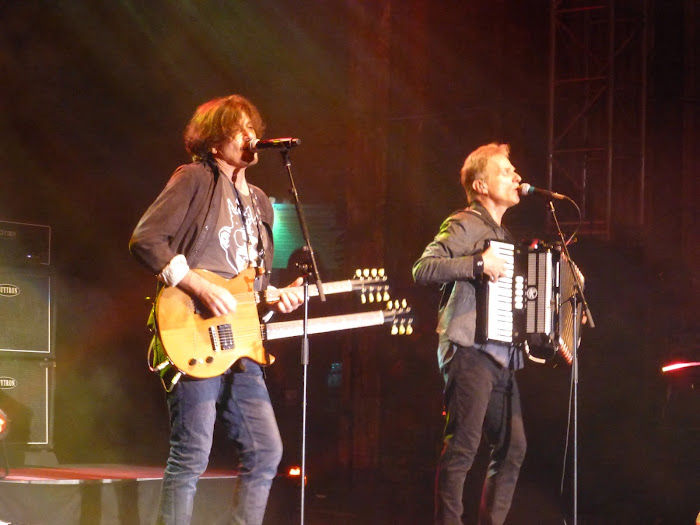 All photos by Bev Kates (exc. as noted)


First encore: Give the Music Back>Nervous Night> Blood from a Stone 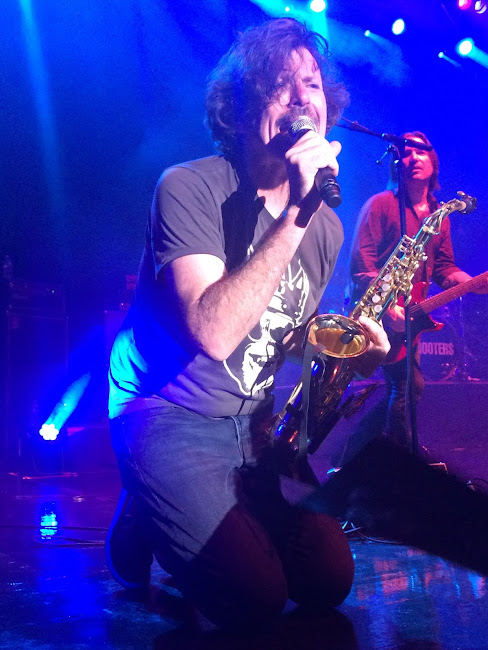 I'm pretty sure that I've seen The Hooters play more times than I've seen any other band. One big reason for that is The Hooters make music to which you cannot sit down. I've seen them in all kinds of venues and give me a bar or a dance hall any day; you've just got to be able to move. I'm not necessarily talking dancing, not in the style of Elaine from Seinfeld if you know what I mean. The best way is to stand in front of the stage where the music can hit you full on in the chest, nice and loud, where you can literally feel every note of the bass and every kick of the bass drum, right in your gut. That, my friend, is a Hooters show. 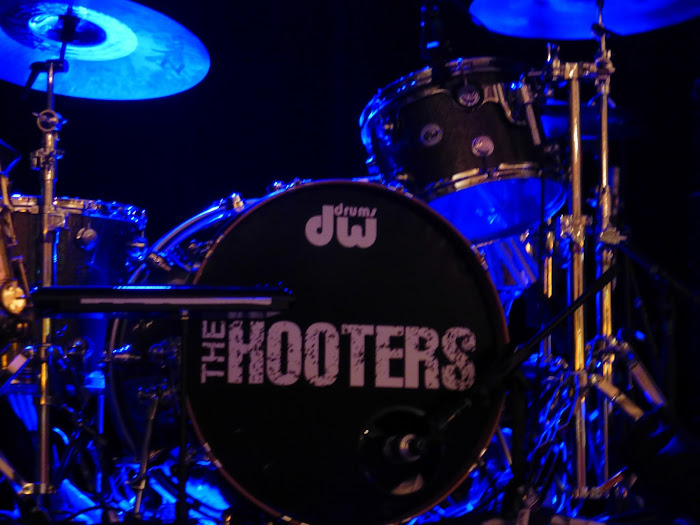 One fond memory I will share is from the early 80s when The Hooters often played the Cabarets. I lived walking distance from the Ambler Cabaret when The Hooters were playing a residency, it was something like every Thursday night for a month. So I walked down to the show, stood in front of the stage and had a totally enjoyable night of music. While there, I bought a Hooters t-shirt. The next week I came back wearing my Hooters t-shirt. I could not get into the venue because wearing a t-shirt violated their dress code. Recognizing the irony of the situation, I walked back home with a smile, donned a button-down shirt and walked right back to the venue for another great night of rock 'n roll, Hooters style. I could not get enough. 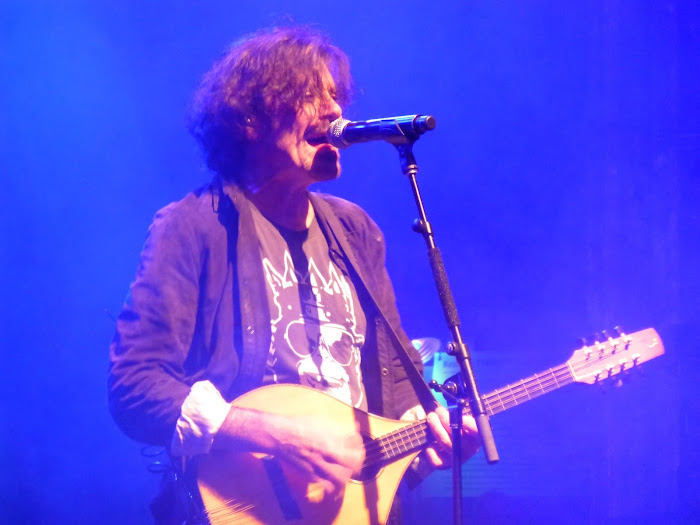 Back at the Keswick, the lights went down and Pierre Robert took the stage, the WMMR disc jockey who has been behind The Hooters since day one. Among his comments he said that right now, today, 35 years on, The Hooters are playing better than they ever did. He wasn't kidding. After opening with a fiery "I'm Alive", the boys delighted the crowd by reaching way back for three songs from their very first album Amore: "Hanging On A Heartbeat", "Amore" (the title track, a nice surprise), and "Day By Day". They were tight, just like thirty some years had not even passed, "you can't waste time when you're hanging on a heartbeat"; whew! 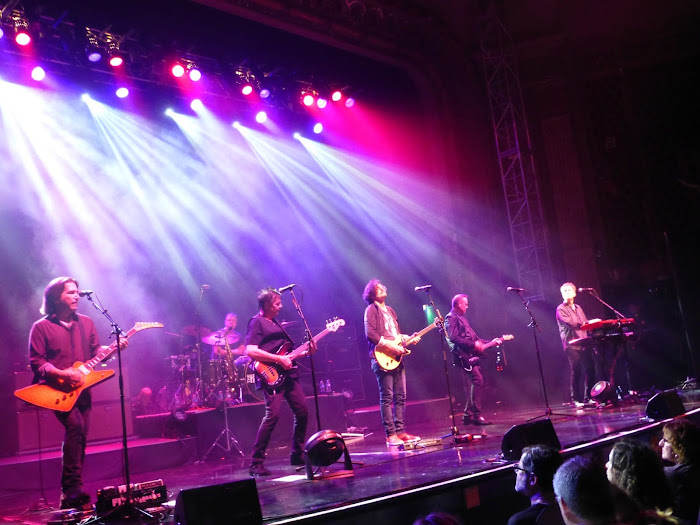 After some "Morning Buzz", the classics were non-stop, a beautiful "Private Emotion" then right into "South Ferry Road" (you know that little street in East Falls that connects to Kelly Drive/East River Drive). Then "All You Zombies" with that glorious reggae riddim.

The Hooter's signature covers and the hits would not stop. Next was their acoustic take on Don Henley's "The Boys Of Summer" leading into "Graveyard Waltz" and their intense reggae version of "500 Miles" complete with the verse they added about Tiananmen Square. Next up was their version of "Lucy In the Sky With Diamonds", which nicely set up "Where Do the Children Play". 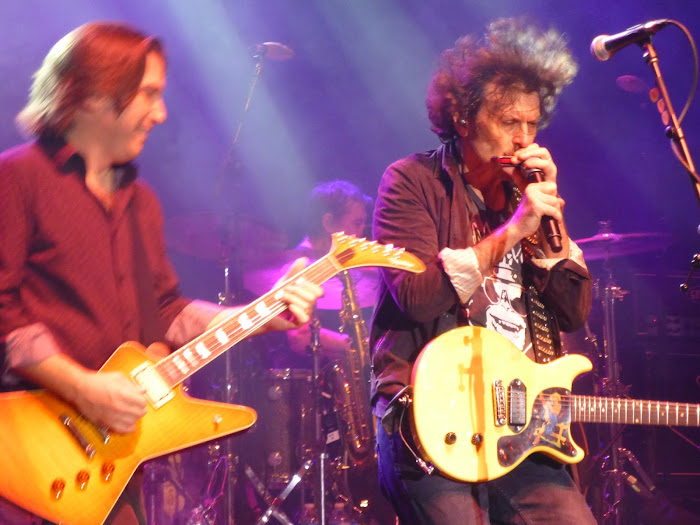 As they played, the years were literally melting away. Eric Bazilian sang and played that familiar two neck guitar, and he doubled on sax, just like the old days. Rob Hyman sang and played all manner of keyboards, including accordion and the famous melodica that gave the group their name. David Uosikkinen anchored the whole thing on drums and Fran Smith completed the rhythm section on bass. John Lilley and Tommy Williams also played guitar. The great songs kept coming. This was the home stretch. 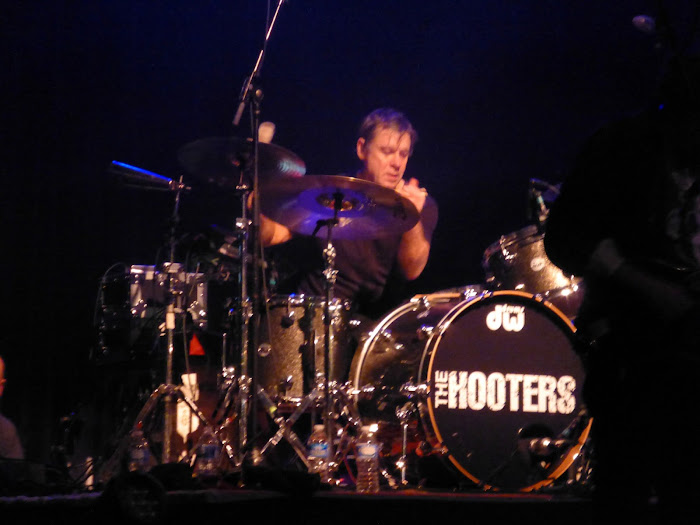 "Karla With a K" sounded amazing leading into "25 Hours a Day"; so great to hear that old one. I loved that they played "Satellite", it stayed with me long after the show, "so jump in the river and learn to swim, God's gonna wash away all your sins, and if you still can't see the light, God's gonna buy you a satellite". An intense "Johnny B" set up "And We Danced" to close the set. This was a superbly selected set. Awesome, totally awesome.

For whatever reason, the Keswick ushers seemed much less consumed with people's cameras than usual, so Bev ran video for the entire first encore, see above; she got some great angles from right in front of the stage. They started with a gorgeous "Give the Music Back", then "Nervous Night" was a nice surprise. Then the crowd went nuts as they played "Blood from a Stone" and everyone sang along, just like the old days. 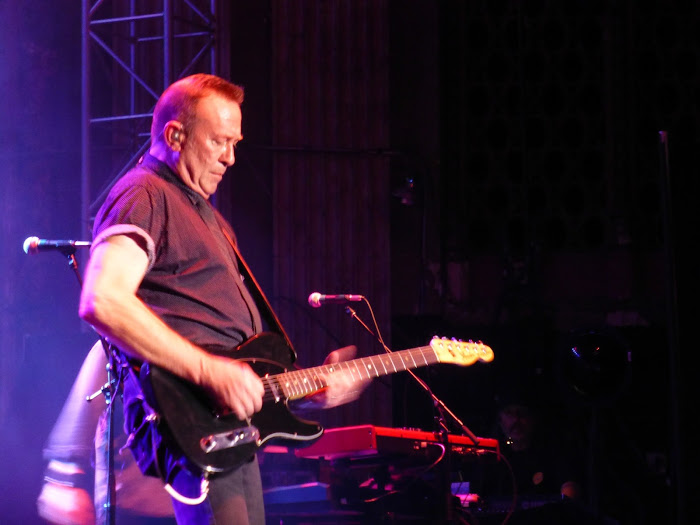 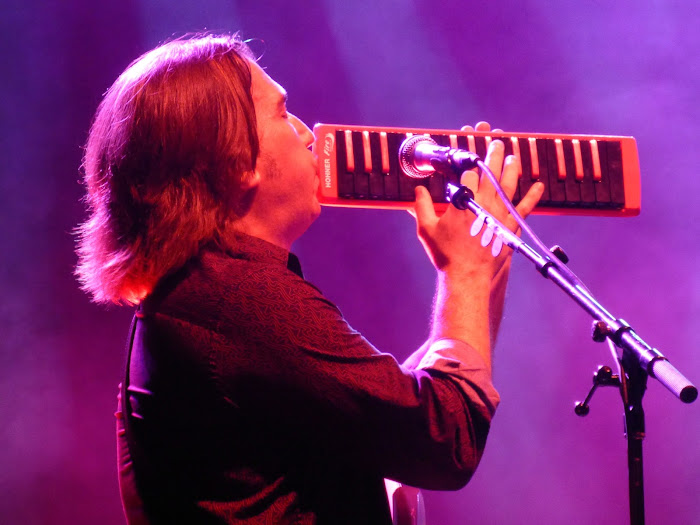 The Keswick was going crazy as The Hooters left the stage. After a short time they reappeared for encore #2. First they went way back to the early days for "Birdman" and their very first single, "Fightin On the Same Side". The second encore rolled on with Rob and Eric's two songwriting triumphs. First was their version of Joan Osborne's "One of Us"; it celebrated both Bazillion's song and The Hooters' collaboration with Osborne on her megahit Relish album. Then came Hyman's composition "Time After Time" which, similarly, celebrated The Hooters backing Cyndi Lauper on her brilliant debut album, She's So Unusual. During the thunderous applause that followed, the boys left the stage only to come back for yet a third encore, it was the celebratory "Washington's Day". Then they took their final bows and another one was in the books. Many thanks to Rob for the setlist, and to David for the drumsticks. And many, many thanks to The Hooters for 35 great years; long live The Hooters. 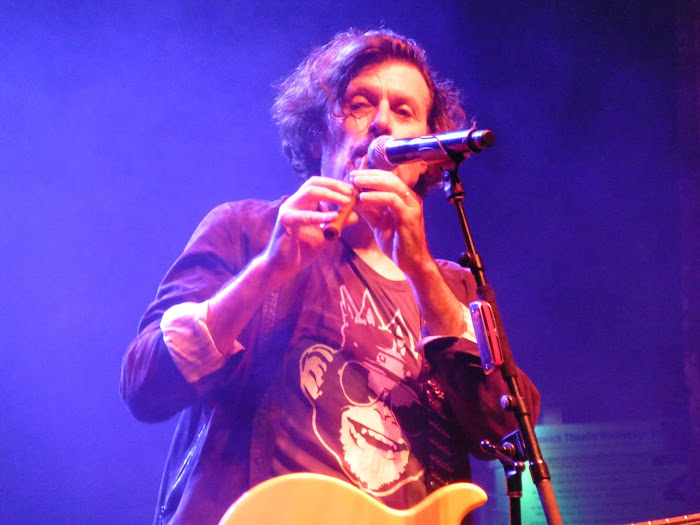 With all the music and all the history still resonating, I thought of a great moment in Hooters' history that I'll share before wrapping this up. As best I can determine, the year was 1985. The Hooters were celebrating what would have been their fifth anniversary as a band. The venue was located at 608 South St; in between the property's reincarnation as a Tower Records and its original use as a furniture store named Ripley, there was a venue named Ripley Music Hall. In honor of this being their anniversary show, The Hooters brought out a ska horn section, then they proceeded to play the most incredible version of "Wireless" that I had ever heard. I would give my left you-know-what for a recording of that show. 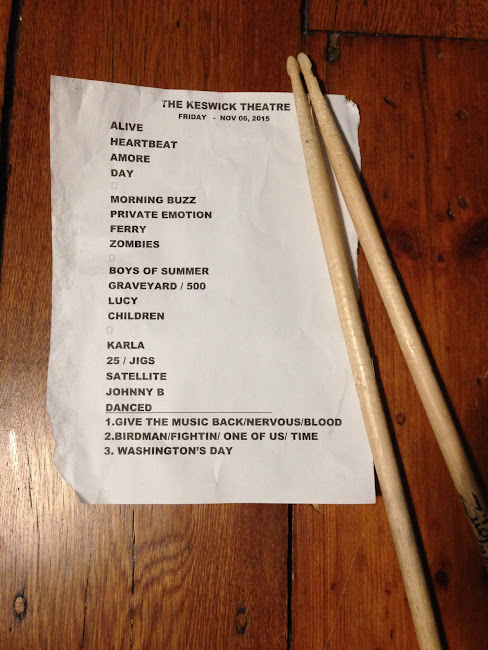 Charlie Ricci said…
Great review!!!! I was there with you that night at The Ripley. It was indeed a great night. Glad you liked this show too.
11/21/2015

Bill Dorman said…
I don't care for these guys a ton but Man what a show and BEV MVP honors for you you Menchette !
Bloody and non bloody well done .
You are non Maryanne with the shaky hands!
Steady handed Action News Bev. hard to get a decent acronym out of that .
Much better than our Eagles .