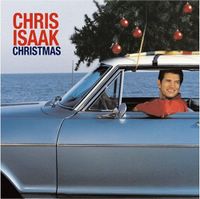 After watching several seasons of Chris Isaak's Showtime series, I've developed a large appreciation not only for his music but for his great sense of humour, and the intelligent and friendly personalities of Chris and his band which came through the semi-scripted series loud and clear. Now comes Chris' Christmas album which is a complete treat - like comfort food for the soul at Christmas time. Even the more simplistic tunes which were James Taylor's undoing serve Isaak well as he stamps them with enough of his personal style to make these songs well worth your Christmas listen, yes even his (mercifully short yet) heartfelt acoustic go at "Auld Lang Syne."

Along with eleven old favorites we also get five new Isaak compositions, including one, "Washington Square" that has the goods to hold it's own with other great Christmas-away-from-you songs like "Merry Christmas Darling." We even get to hear Isaak sing a more than competent version of "Mele Kalikimaka."

As good as this album is, some of these songs sounded even better peformed live with band on Jimmy Kimmel's late night ABC program in a sort of parody of the Nick & Jessica Christmas Special (why do we even know who "Nick and Jessica" are?). There is also a more fully produced live performance Chris and band did for the PBS Soundstage series, also available by direct mail from PBS in an expanded DVD version (watch this space for a video review by next Christmas). Great Christmas discs make the Christmas season that much more enjoyable and that is exactly what Chris Isaak provides on Christmas.