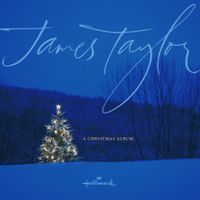 A beautiful cover, a great artist like JT, Christmas music, what could possibly be wrong? Well, take the song selection for starters (please!). The majority of this record is cringe-inducing, mostly due to material like "Winter Wonderland," "Santa Clause is Comin' to Town," "Go Tell It On the Mountain," "Deck the Halls" and "Auld Lang Syne" all of which are not bad songs exactly, it's just that they are way beneath his amazing talent. James' ability to take a song someone else wrote and make it totally his own is wasted on such simplistic fare.

On the other hand, there are a couple of real stinkers. "Baby It's Cold Outside" is suffering from a serious case of overexposure; not that there's anything specifically wrong with James and Natalie Cole's rendition except for the fact that it's been done too much lately by too many pairs of singers who really have no business recording this, so by now the well is basically poisoned. James and Natalie don't do themselves any favor either with their faux conversation during the fadeout. Even worse though, is "Jingle Bells" performed as a blues song in the manner of "Steamroller." Yikes - didn't producer Dave Grusin have the nerve to tell James this was a bad idea?

The only thing saving this mess is a nice version of "In the Bleak Midwinter," and a competent read of "The Christmas Song" which almost seems like an obligatory no-brainer. There are also two relatively unknown tunes which allow a little relief from the saccharine sweetness of these proceedings. I'm of the belief that James voice could ordinarily make anything sound good, however this disc suggests otherwise. That the opportunity to make a truly great Christmas record with JT has been wasted, is really the core of my disappointment with A Christmas Album.