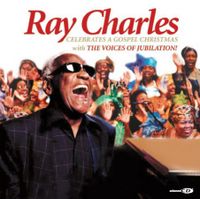 In what is purported to be his last recorded live performance, this is not only a great Christmas album easily surpassing Ray's other Christmas CD, The Spirit of Christmas (Rhino, 1997) but this also qualifies as one of the best Ray Charles albums ever. You really can't tell from the audio that this is a recent concert performed while Ray was in declining health; on first listen I assumed that this was a re-release of a concert from twenty-some years ago - that's how good Ray sounds singing with a gospel choir.

The whole album is a joy but he really knocks it out of the park on "Oh Happy Day" which also features the Voices of Jubilation sounding great as well on this gospel classic. Ray's voice and his unique ability to combine genres as diverse as rock, jazz, soul and country, makes his vocal style a perfect fit with gospel music. It's great to hear Ray's take on "What Kind of Man is This", "The Christmas Song," "Silent Night," even "Rudolph the Red Nosed Reindeer," and an inspiring version of "America the Beautiful" to end the set.

This performance is available both on CD and somewhat expanded on DVD and also as a gift set that includes both. I haven't seen the DVD yet, although the two video tracks included as a bonus on the CD give a good preview. Ray may have been not long for this world when he did this concert but he still had it, right to the end. This is a gem, as good as it gets. R.I.P. Genius, and God bless.