Kaki King played WXPN's Free-at-Noon live broadcast concert series on Friday February 18th at World Cafe Live. I managed to break away from the office for a nice mid-winter's walk across town for this highly enjoyable lunchtime concert. Having seen King play live before I was well aware of her virtuosic technique with the acoustic guitar; she picks the strings with all ten fingers, one hand in the normal position, the other high up on the neck. The overall effect is quite amazing, not unlike the sort of playing one associates with Tommy Emmanuel, Michael Hedges, and Leo Kottke.

Although her first CD is a good representation of her ability as a player, I'd have to say that the music didn't seem to be much more than a vehicle for her ample technique. Her previous concert performances more than compensated with a friendly humorous rapport with the audience combined with her frenetic attack on the guitar. This performance which featured mostly tunes from her second album Legs to Make Us Longer seemed to draw from a deeper musical well than previously and left me ready to go back to the new album for some more serious listening. Working with fellow guitar free spirit David Torn as producer, King offers an array of unusual and interesting compositions on this record. 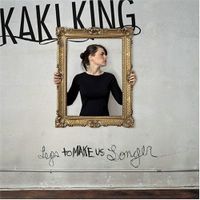