August 01, 2005
The following was written for the newsletter of the college radio station where I had the privilege of working with Doug many years ago.

Douglas D. Halsey, Earlham Class of 1974 andWECI staffer, died April 18, 2005 of complications related to Multiple Myeloma. Doug was born in Bronxville, New York on June 4, 1952. He graduated Earlham with a Bachelor's degree in Political Science and pursued a career in sales which led to the plastics industry culminating in a long term position as Director of Midwest Regional Operations for the Society of the Plastics Industry, Inc.

At WECI, Doug hosted classical music programs as well as shows featuring other types of music. Doug had a good sounding voice for radio that was equally well suited to delivering the news. Doug had a great sense of humor which also found an outlet at WECI, including numerous character voices that he used for recording station IDs and show promos. He eventually hosted a long-form comedy special that mixed British humor from sources like the Bonzo Dog Band (an early precursor of Monty Python) with then cutting-edge rock by Frank Zappa and Roy Wood (the Move and early Electric Light Orchestra). His impressions of Ed Sullivan and Broderick Crawford were legendary; he even threw in the occasional comedy bit from Don Imus who had then just released a radio comedy album. Doug's professionalism on and off the air, combined with his musical and comedic sensibilities made him a huge asset to WECI and the Earlham community.

Doug's love of music never wavered throughout his life; he was partial to artists such as Little Feat, John Hiatt, Bruce Cockburn, early Genesis, and Julia Fordham. Doug played acoustic guitar and held a special appreciation for guitar players such as Alan Holdsworth and Sonny Landreth, but his all time favorite artist throughout his life, to whom he introduced many WECI staffers and listeners, was acoustic guitar master Leo Kottke. As recently as the summer of 2004 when Doug, Dave Curtis (Class of '75 and former WECI Station Manager) and I met in Chicago, Doug brought along the latest Leo Kottke cd for us to hear.

Doug fought a long and valiant battle against the cancer that ultimately consumed him, engaging in experimental treatments that together with his energy and spirit, afforded him many more years of life than might have been expected. He leaves behind a wife, Deadra and an eleven year old son Zachary in Elmhurst, Illinois. Doug took a special joy in the 2004 World Series win by his beloved Boston Red Sox, and according to Deadra he has passed that passion on to Zach. Doug is sorely missed by all who knew him.

by William Kates (Class of '75 and former WECI Station Manager) 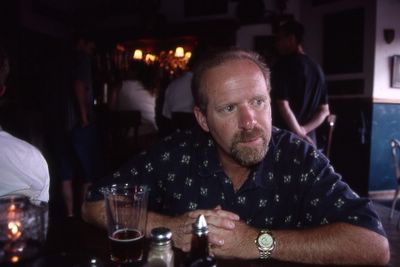 Doug Halsey at the Duke of Perth Pub in Chicago, shortly after a
Cubs game in August 2002

koeeoaddi said…
I was so sad to hear this. My sympathy to all his family and friends. He was way too young.
8/06/2005