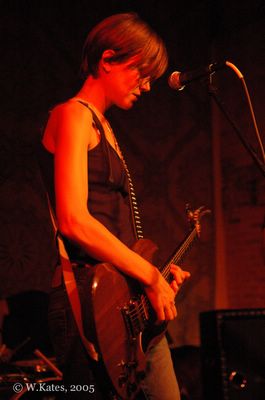 Juliana Hatfield may be conflicted about her place in the scheme of the music biz (check the excellent rant on her website), but man can she sing and play the guitar. Writes a great tune too. Plus, reading her diatribe you've got to love her attitude and spirit. With Del Amitri defunct and Springsteen turning into Woody Guthrie, she might be my favorite rocker. Her set tonight was well worth putting up with two rather noisy opening bands and all the time it took. Just now heading for bed (4am).

She may be best known for the songs she writes, but she is truly one of our great guitarists plus the combination of her electric guitar work with the sweetness of her voice has always been a potent combination. For this tour it's a three piece with Juliana carrying every song with her guitar and voice, backed only by bass and drums. Pete Caldes did a nice job behind the kit, and Ed Valuaskas played some superb Fender bass and also provided backing vocals.

Juliana mixes her rhythm and leads so effectively that every song equals or exceeds the studio versions. Tonight's set was comfortably long and cooked with a relentless intensity that was a joy to behold. She played a wealth of tunes, including most if not all of the new album, Made in China. After a two song encore, she thanked the small but incredibly enthusiastic crowd at the North Star by coming back for a second encore. 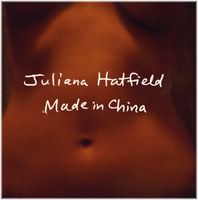 Juliana may not want to be thought of as "alterna-waif" (understandable), but she is so incredibly thin that Kate Moss might look at her and think twice about ordering dessert. The short hair looks great but I totally didn't recognize it was her that I was handing my $12 to when I bought her new cd before the show. I did get the chance a few minutes later to say how much I enjoy her work. There was one audience member who seemed like she was working to understudy Juliana, sharing a sort of similar look and singing every word of every song, including everything off the new album which is impressive (scary) since the album's only been out about a week.