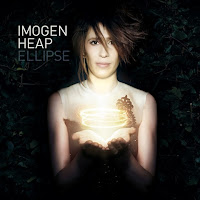 topped many year end best lists in 2005, including mine. Almost four years in the making, her followup album Ellipse

is finally ready and will be released on August 25th on RCA. Speak for Yourself

was created in a studio Imogen built in her London flat, and was compelling for it's combination of electronics, unusual instruments, powerful rhythms, and Imogen's highly melodic songwriting and singing. To say that expectations are high for Ellipse

would be an understatement. The first song, "First Train Home" was released this week for preview listening, a video is also available to U.K. viewers, and is due soon here in the states. After a few spins, it seems that "First Train Home" picks up right where "Goodnight and Go" left off. Listen and enjoy new music from Imogen Heap.


The video of "Canvas" is here.