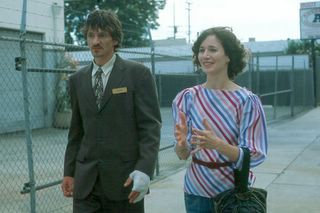 One part Garden State and two parts Ghost World, this refreshingly unguarded first film by performance artist Miranda July not only won awards at every major film festival including Cannes and Sundance, but has been getting universally good reviews. Even after viewing the trailer in advance of tonight's WXPN sponsored screening, I couldn't tell exactly what it was about. There is a good reason for this, as the film is not so much a traditional linear story; it's more like a glimpse into a moment in the lives of some slightly flawed, occasionally damaged, and basically unusual characters whose efforts to fight the basic entropy of life and find some basis for happiness is chronicled by July's unobtrusive camera.

The first thing you notice about these characters is that they don't say or do any of the things that you expect movie characters to do. As in Zach Braff's Garden State, July in her multiple filmmaking roles, seems to have been able to bring her story to the screen with her uniquely personal point of view and sense of humor intact. The next unusual thing about the characters in this movie is that although a good number of them are kids, the movie doesn't treat them as movie kids, it treats them as people, complete with awakening sexual interests that are presented by July in a humorous, nonjudgmental manner that is totally unexpected.

There are several parallels with Ghost World. First and most obvious are the two young teenage girls who are both amused and repulsed by the attentions of an older male neighbor. There is also a humorous subplot about art, in this case July's character is a video artist endeavoring to get an exhibit into the local museum of modern art. Then there is the developing romantic interest between the two lead characters, artist and elder-cab driver Christine (July) and shoe salesman and recent divorcee Richard (John Hawkes). The relationships in Me and You and Everyone We Know are as fragile as the characters, and no one in this film seems quite sure of what to do next. July has an appealing capacity to allow her characters to zig just when you expect them to zag.

Richard's two sons from his failed first marriage, ages 7 and 14, are especially well cast. The seven year old, with some assistance from his older brother, engages in some hilarious internet sex chat with a concept that might reflect an actual seven year old's frame of reference. There's another well drawn neighbor character in the form of a young girl of about ten or eleven who is assembling a semi-secret hope chest of household items to form her dowry in the old time European tradition, as she calls it. The music on the soundtrack is as unusual as the characters, and similarly goes where you'd least expect. When you've seen one car crash or explosion too many at the multiplex this summer, check out this quiet, amusing, and poignant little movie.