Album Preview: Steve Winwood's last two albums were considered by many to be his best work since Traffic. On these records he re-discovered the Hammond B-3 organ and incorporated jazz , blues, and soul into a stretched out rock groove and in so doing made his most enjoyable music of the last two decades. Nine Lives is released on April 29th, and if the preview track "Dirty City" is any indication, the new groove continues. Eric Clapton adds a guitar solo on this track which features Winwood also on electric guitar and some nice B-3 backing. Vocally, you'd never know that Winwood's turning sixty this year. Check out this preview excerpt of "Dirty City", the first single.

The full 7:45 album version is available for purchase now on Amazon 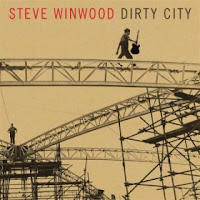 Clapton will join Winwood for three shows at Madison Square Garden this coming week before Winwood takes to the road with Tom Petty and the Heartbreakers. The tour advertising has Winwood opening, which seems somewhat backwards considering each of their respective histories, but Petty does seem to be riding a nostalgia wave that included his recent halftime performance at the Super Bowl. Watch for Nine Lives on Columbia, April 29th.