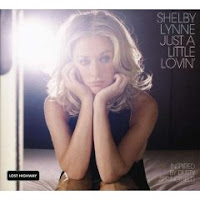 Shelby Lynne has written and sung many great songs in her career, but all the qualities that have contributed to her artistic success over the years come together to maximum effect on Just A Little Lovin'.

Shelby's devotion to the power of music and to old school sound quality informs this loving tribute to Dusty Springfield, and in covering the songs that Dusty made famous she indirectly also tributes some of popular music's greatest songs and songwriters.

Considering that just the premise alone knocks it out of the park, the execution by Shelby with producer Phil Ramone takes it to the next level with note perfect treatments on every song. It's been a long time since an album (Norah Jones) had such an uncluttered and open sound, accomplished with the simplest arrangements of voice, guitar, upright bass, drums and keyboards. According to Shelby's myspace blog (see below), she insisted on using two inch tape instead of digital, and the organic recording method has yielded a beautiful sound and the arrangements give the record an amazingly subtle power.

Before hearing this CD, I caught Shelby singing one of the songs from this record on the Tonight show, and the understated and simple quality of the arrangement stopped me in my tracks - you almost never hear musical quality like this on network television. For the most part, the songs are so good and so familiar that hearing them again will cause you not only to fondly remember the originals but at the same time greatly appreciate these new interpretations; the dual effect is unexpected and exhilarating. In addition to the Dusty Springfield songs, there is one original song by Shelby, "Pretend", which is her personal tribute, she describes it as pitching the song to Dusty and imagining that Dusty would have sung it. The album closes beautifully with "How Can I Be Sure", more well known by Felix Cavaliere and the Rascals who wrote it, but also covered by Dusty Springfield.

On her last album, Suit Yourself

(2005), Shelby ignored commercial pressures and self-produced a great album of her own songs, arranged and recorded her way. Based on the evolution of Shelby's career, the subtle quality of Just A Little Lovin'

should come as no surprise. This is the great Shelby Lynne album that we always knew she would one day make, a perfect record. Enjoy!

Watch the video for "Anyone Who Had a Heart".

Watch Shelby in the studio recording "I Only Want to Be With You". That's Dean Parks on guitar, Rob Mathes on piano, Kevin Axt on upright bass, and Gregg Field on drums; so nice to have this window into the recording studio.

And here is a very cool live version of "You Don't Have to Say You Love Me" with the always amazing Mark Goldenberg on guitar:

A Studer 2-inch tape machine is a huge cumbersome beast that takes up a lot of space and might need pampering and attention when you make records. It requires that you use big, heavy rolls of 2-inch tape that need changing when you record 2 or 3 songs on them. And hardly anyone produces or manufactures vinyl records anymore. And nobody has a turntable. But it's making a trendy comeback.

Just because something is easier doesn't make it better. It certainly doesn't make it sound better. I had a digital recording rig in my home studio for a month or two and got so depressed. I quit writing songs, my guitar collected dust and I thought my creative life had ended. So I jerked it all out of the wall and threw it in the garage and that's where it will stay.

My new album, Just A Little Lovin' was made on a 2 inch tape machine. I demanded it. I like working with engineers and producers who love and appreciate tape. I love the sound, smell, and feel of tape. That's why I enlisted legendary record producer Phil Ramone and the brilliant recording engineer Al Schmitt. They didn't mind my insistence. They put up with my hardheadedness. Hardly anyone uses tape anymore because they claim it's so expensive and it's just easier to use a computer. Most engineers can operate any computer rig in studios these days. But if you ask them to run a Studer and put on a reel of tape, they run down the hallway screaming for Mommie. I'm sorry, but I can't get turned on looking at a computer screen. First of all it's not more expensive. By the time digital users spend the time and money to buy the software needed to put that "tape sound" on their digital record, they have spent more time and money than I have. While their downloading "tape sound" software, I'm kicking back on the houseboat drinking beer with a fishing pole in my hand listening to Django.

It's not for everybody. Tapes not perfect like digital. If you want to sing the word "love" 40 different times and 40 different ways then digital's for you. Tape requires attention. You can't just push the space bar and go to lunch. For example: When I put on my vinyl (yes vinyl) of Led Zeppelin's Whole Lotta Love, my favorite part is towards the end when you hear the "print through" of Robert's vocal's. You know the part when he sings "Yeah, Yeah, Yeah, Yeah". For years, before I made records I thought that what I was hearing was on there on purpose, for effect. But while making my new record the same thing happened. There is no reason, it's just a tape thing. Sometimes that happens. It's not as noticeable or as cool as Zeppelin but if you listen to my first track, "Just A Little Lovin'", towards the end you will hear my voice. I made a record with print through. Wow. Everybody wanted to fix it but I insisted on keeping it. This is a true testament to using tape. The "real" comes through. It makes me proud to be such a hard head.

I was born in 68. Mama and Daddy had albums. I grew up listening to their vinyl. I have discovered that having a vinyl collection is so much cooler than having an Ipod. Now, I have an Ipod and I admit they are genius especially for travel and convenience. But they aren't really any fun. I don't call up my friends and say "Hey why don't y'all come over and bring your computers and let's have a party"? Hell no! I say bring pot, wine and vinyl. That's sexy. It's really a great excuse to get together and listen to music. Everybody takes a turn looking through the collection and it's interesting to see what each person plays. The vinyl way is just me. I think if if we all listen to more music together it really doesn't matter how we do it. Music will save us all just like it always has. We feed our souls with it. Vinyl just creates a little more discussion for us. You get to look at the covers, the liner notes, sometimes the lyrics are included. Plus you can roll a doobie on it. That's hard on an Ipod.

Times are tough. Concert tickets are high and records are too. Hell, everything is high and nobody has any dough. With our economy and the way it's headed, my guess is that we'll all be staying home drinking bottles of Two Buck Chuck listening to music, however we choose to do it. Cheers music lovin' fools!

Charlie Ricci said…
While I don't share Shelby's affection for vinyl I love her taste in music. I have all of her CDs beginning with 2000's I Am Shelby Lynne and they are all wonderful. She is very close to being my favorite female artist. I still need to hear this new one but I'm sure I'll love it.
3/10/2008